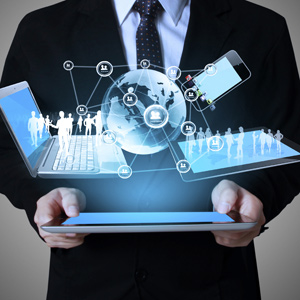 The digital revolution is turning our traditional bearings upside down. Two professors at Grenoble Ecole de Management co-authored an article in the Finance Contrôle Stratégie journal to explain why it's impossible to value high tech companies in this new economy.

In May 2012, Facebook was listed on the NASDAQ at $38 per share. This translates to a value of more than $100 billion, which is almost 100 times its net results. On November 7, 2013, Twitter was listed for the first time on the New York Stock Exchange and within 24 hours its stock price had increased by 73%. How can we explain this difference between stock price and market value? Michel Albouy and Safwan Mchawrab studied this phenomena and explain in their latest article why the most advanced theoretical and mathematical models cannot accurately value the famous GAFA (Google, Amazon, Facebook and Apple) as well as companies such as Microsoft, Oracle or Twitter.

"It's very difficult and even impossible sometimes to understand the stock prices of these players using current financial analysis methods. Their valuation is based on their potential worth instead of their current operations." explains Michel Albouy, professor of finance at Grenoble Ecole de Management. It's already a delicate exercise to value a "traditional" company whose activities and markets are well understood. Such analysis is all the more risky when speaking of high tech companies.

The challenge of valuing these companies can be explained by several factors: "Many of these companies' assets are intangible, their leaders are charismatic and investors act in irrational ways. They tend to behave like fans of an international brand instead of behaving like traditional shareholders." analyzes Michel Albouy. In addition, uncertainty over technological, geopolitical and macroeconomic factors adds all the more uncertainty to the mix.

A digital revolution is transforming the economy

As our world continues to accelerate the pace of its digital transformation, the business models used by Google, Amazon, Facebook or Apple symbolize a change in economic paradigms. "We're taking part in a digital revolution that is equivalent to the arrival of steam power. At the time, nobody could have predicted the future of railway companies. We're currently in a similar situation. The future is becoming more and more uncertain and it's difficult to make long term predictions." adds Michel Albouy.

In addition, the arrival of new players such as Airbnb, Uber or Booking.com and the development of Financial Technology are all revolutionizing the need for middlemen and disrupting traditional business models. Are we on the verge of bursting a bubble like in 2000? The authors of this latest article share one certainty: "Investing in a company, in particular a high tech one, is always a bet on the future. And nobody holds the keys to the future."