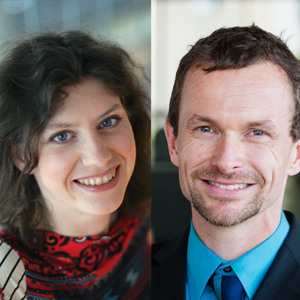 On March 8th 2016, International Women's Day events were held around the globe. Despite many advances in gender equality, gaps remain frequent in various fields and countries. Mark Smith and Severine Le Loarne from Grenoble Ecole de Management share with us their insights on overcoming the challenges of gender parity.

Mark Smith (MS) is the Director of the Doctoral School. Severine Le Loarne (SL) is head of the Management, Technology and Strategy department and founder of the FERE research chair for women and economic renewal.

Achieving concrete results is a work in progress

MS: "The risk in 2016 is complacency. There are laws on gender equality, many companies have set up gender policies, and there are equal numbers of men and women graduating from business schools. But our research demonstrates that gender gaps are dynamic. When we close a gap in one field, another one opens up in a different field. Laws and policies don't necessarily translate to concrete results."

MS: "Studies have highlighted that policies on parental leave for men often have little impact because the underlying business culture still weighs in against such practices. In general, unless society and organizational cultures are supportive, male workers need to be secure in their career position (e.g. being senior) if they are to avoid difficulties in taking advantage of such policies."

SL:"In addition, gender inequality goes beyond company boundaries. During a study carried out at Grenoble Ecole de Management, first-year students (55% female and 45% male) carried out an innovation project in groups that were either all-male, mixed or all-female. The projects were then judged by the students themselves and a panel of experts. The students, who were aware of each group's gender makeup, chose zero projects submitted by all-girl groups and few projects from mixed groups. On the other hand, the expert panel was not informed of each group's gender characteristics and was able to select projects without any gender bias. The results were stark: The experts selected equal numbers of projects from the three types of gender groups."

MS: "The key is to remember that women don't necessarily want to follow the traditional stay at home model. Nor can they necessarily afford it. Women in all types of careers expect and want to continue their progression, a fact which companies can benefit from. On the other side of the coin, many men with children have the same constraints and complaints as women with children. Making assumptions about behavior is risky. Organizations that don't appreciate the diversity of their talent, risk losing them."

A gender review can open an organization's eyes

MS: "It's a matter of recognizing the radical changes that have occurred in the modern workplace. We have many stereotypical assumptions about gender roles such as men work in IT departments or women work in administration. Imagine if you have a shortage of IT people and a manager only thinks to recruit men: You've just halved your potential recruitment pool."

SL: "Companies have to be willing to question many aspects of their organization. Leadership has to be open to quote on quote non-masculine leadership values. Office hours, locations and networking have to be adapted. If companies are open to telecommuting for example, then it becomes possible for employees to work from home when children have to be picked up from school."

MS: "It is essential to ask questions. Are our policies having the impact we desire? Have we improved in terms of employee recruitment and retention? Are we considered to be a good employer? Do our policies reflect the diversity of our current employees and the employees we would like to attract? What assumptions are we making about the men and women who work for us?"

SL: "To help look further into these questions, we have just launched a new research chair geared towards research on women and economic development. The goal is to continue expanding our understanding of practices developed by women. Through innovative education materials and an incubator to test them out, we aim to accompany female entrepreneurs. As Mark said earlier, the risk is complacency. Researchers and companies still have a lot of work to do in the field of gender equality."