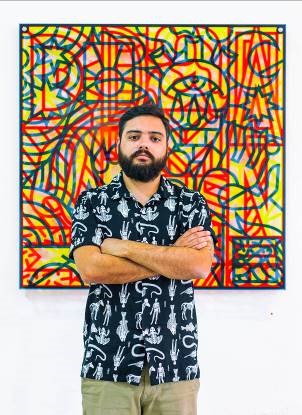 To celebrate its status as a société à mission and to share its five commitments with everyone, Grenoble Ecole de Management invited the Portuguese street artist, AKACORLEONE, to create a symbolic mural for its Grenoble campus, entitled "5 éléments" Visible from the street, the mural is displayed on the first floor windows of the building at 12 rue Pierre Sémard in Grenoble.

The piece is a continuation of the artist's series of stained-glass windows, and highlights the five pillars of the school's commitment in a colorful, visual, and metaphorical way:

In addition to the five causes for which GEM and its entire ecosystem are committed, the artist added three essential values for building a sustainable future.

Behind the pseudonym AKACORLEONE is Pedro Campiche. Born in Lisbon in 1985, the artist has built his visual identity somewhere between analog and digital, defining himself through a strong saturation of colors and shapes to create unique visual sensations.

A collaborative effort to combat sexual and gender-based violence

At the initiative of Grenoble Ecole de Management, the Grenoble Public Prosecutor's Office has taken up the issue of handling cases of sexual and gender-based violence (SGBV). The latter has just signed a partnership agreement with the Direction Départementale de la Sécurité Publique (Departmental Directorate of Public Security or DDSP), the association France Victimes 38, and GEM, along with Grenoble Alpes University, Sciences Po Grenoble, Grenoble INP, ENSA Grenoble, and the CROUS (regional student welfare office) of Grenoble. The objective: to establish a secure legal framework for dealing with reports of sexual and gender-based violence (SGBV) experienced by students.

Any report of a particularly serious SGBV will be forwarded to the Public Prosecutor's Office, which will decide what action should be taken on the report for the opening of an investigation by the DDSP. Alleged victims will systematically be offered free legal and psychological support by the association France Victimes 38.

This new collaborative system ensures confidentiality for alleged victims and those who reported the incident, while respecting the judicial process.
It is set up in parallel with each institution's own systems. The GEM system enables reporting via a secure platform.  Each report is then handled by the SGBV Alert Team, launched by GEM over a year ago.

GEM's anti-SGBV measures stem from the fight against gender inequality, which GEM has been pursuing since 2017 as one of its five core commitments.

The consulting firm Amplio CatHalyse and Mérieux Nutrisciences join the GEM Economic Peace Chair as partners.
For Dorothée Moyal, President and Founder, and all of the firm's associates and partners, "Joining the Economic Peace Chair is a source of inspiration. Contributing to the research chair allows us to ensure new interactions with a growing community of companies that share values, a vision of the economy and a desire for action; to share experiences of profound change in companies among peers; to develop and give back through openness to various circles and knowledge - particularly academic ones; and finally, to contribute to uniting and spreading humanistic and economically-sustainable practices.

As for Nicolas Cartier, Managing Director of Mérieux NutriSciences, "For the Mérieux Group, joining the Economic Peace Chair seemed both an obvious choice and a challenge. It is obvious because we share the values promoted by the Research Chair, in particular the priority given to people and the belief that employees are the primary asset of any company. In line with our public health mission, our philosophy combines humility and ambition, as we are proud of our roots and are active in a world without borders.
This commitment is also a challenge because adapting to the major changes in the world sometimes means making difficult choices and reviewing our practices.

Joining the Economic Peace Chair means giving ourselves the opportunity to reflect on our actions, exchange with our peers, explore, and work together for a peaceful environment. It means contributing to bringing together Peace and Economy: two words which are far too often considered to be opposites.

For more information on the Economic Peace Chair