Thursday 18th January 2018, the Sales and Business Development Bootcamp at GEM welcomed six companies to share their expertise and put GEM students to the test of “learning by doing” during interactive workshops.

Clement Atoyan, transitioned from an engineering role after his MBA with GEM to a marketing career and today is  “CRM & Email marketing” Program Manager with HP. His new dual degree allowed him to quickly move on to more responsibility in his jobs. In the company, online business is a small part of the whole business and the team which manages it is composed of only 200 people. So, it’s a complex task to manage because there are several customers’ segments and Clément and his team have to deal with all of them to develop efficient sales strategies.

Clément shared his passion for technology and online sales strategies and created a workshop for students to target online gamers and learn about upselling. 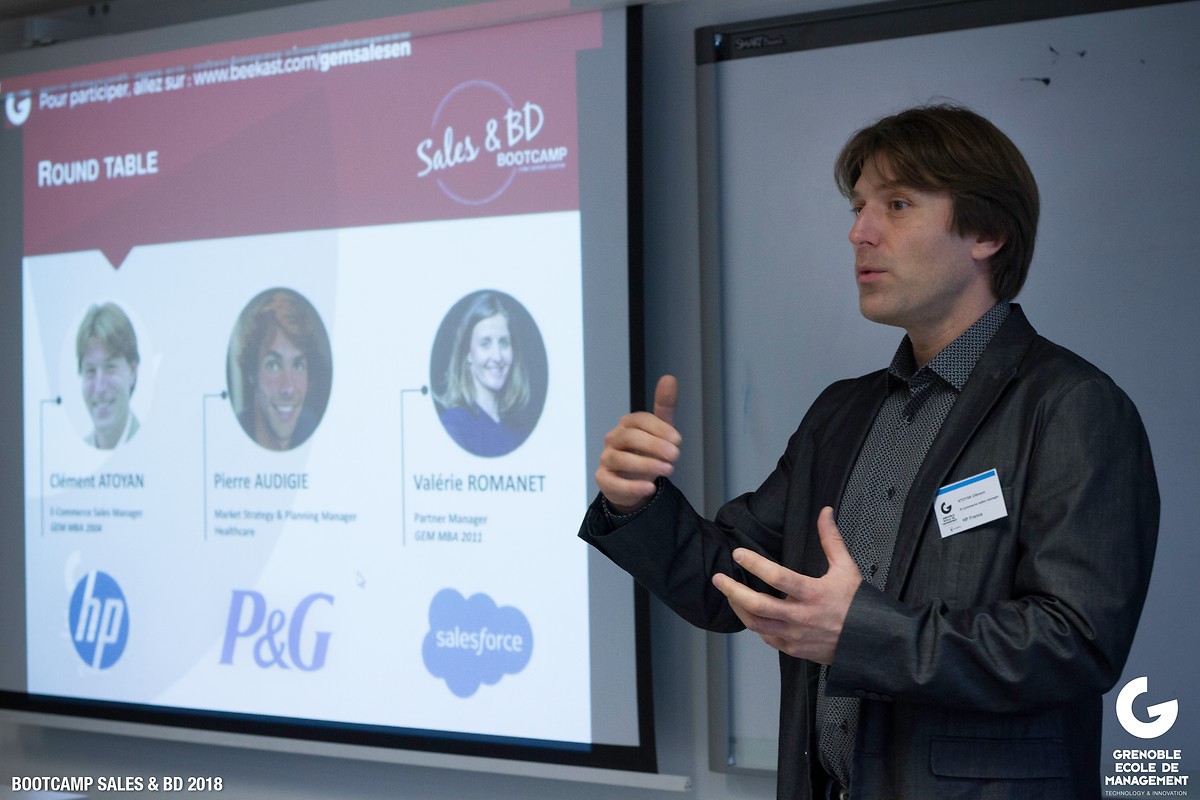 Amaury Paty is someone who likes change and new challenges: he started as a Sales Manager in Rennes where he was in charge of 17 departments and of an annual revenue of 22millions €. Starting at this stage was, according to him, very simulating and rewarding even if he confesses it was also quite stressful. Once he had shown what he was capable of in sales management, he arrived in the Marketing Department in Clermont-Ferrand, headquarters of the group. At this period, he worked for subsidiaries; Kleber and Goodrich before doing some Sales Marketing for large accounts of the firm.

Amaury is now campus manager and assures us that sales posts requires a "real sense of contact with people and a strong capacity of adaptability". He shared this lesson with GEM students by involving them in an interative negociating scenario, the students had 40 minutes to prepare before pitching live to Michelin and showcasing their capacity to convince. 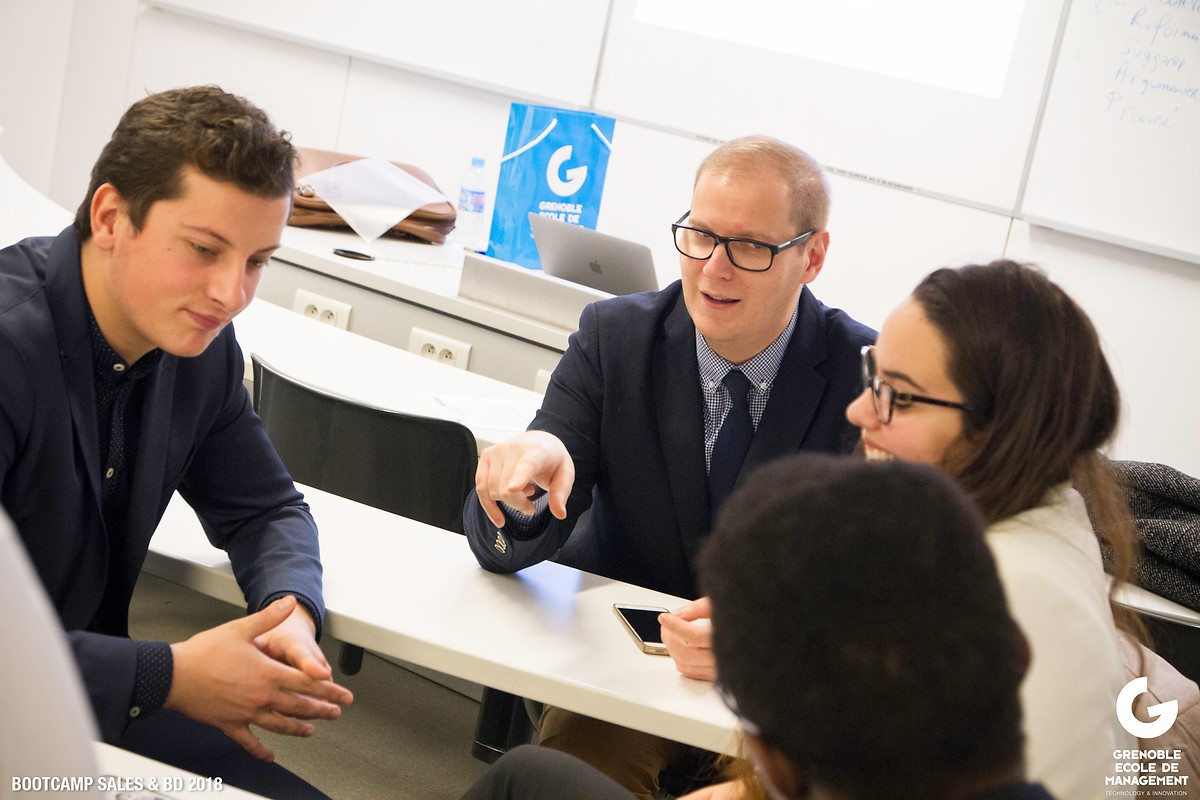 Graduate student of an MBA in Business Intelligence from GGSB, Valerie Romanet started her studies in the Polytechnic National Institut (INP) of Grenoble, studying engineering in signal processing.

As often the case for a lot of students, her mindset regarding studies and career plan slowly evolved when she realized she wanted to use her technical expertise in a more business related position which led her to take an MBA at GGSB.

During her MBA, Valerie learnt not only management and business skills, or how to create synergies between her competencies, but mainly gained self-confidence in being able to continue her career with any new opportunity having a high credibility in the employment market.

To her, the most important for a student at GEM is "first to know one’s strengths and values, to be determined and acquire maximum skills in the position and not to forget to show empathy".

Valérie offered the students the opportunity to behave as if Salesforce consultants conducting their first prospective interviews with a potential client – good fun was had by all , learning by doing. After the workshop, students were able to ask more questions so as to prepare themselves for Salesforce attending the recruitment forum at GEM. 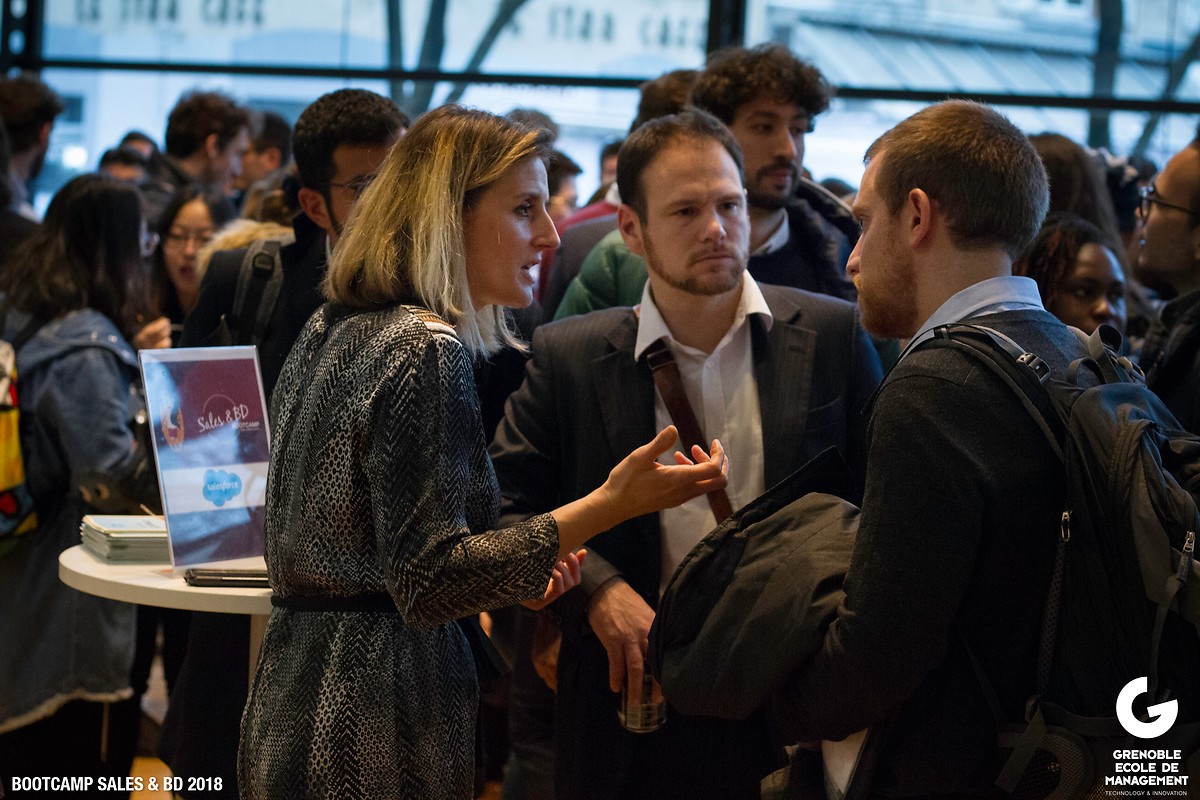 Melchior Devanlay graduated from Grenoble Ecole de Management last year (2017). He entered the school in 1st year, followed the management track and joined two student organizations : GEM en débat and the GEM Store. He managed to land a contract with Auchan, thanks to the help of the school and the "Forum Alternance”. The theoretical courses proposed by GEM – such as Excel practice, management or the too famous MQAD lessons - enabled Melchior success in standing out and put his skills in management, sell, and merchandising to good use.

At the end of his studies at GEM, Melchior joined Auchan to start his career where he was given the opportunity to run a team of 8 people and to widen his perspectives for the future. Auchan offers a great flexibility concerning jobs explains Melchior, indeed, today, having started as a manager in store, he could next work in the bank sector or choose to work abroad for instance. Actually, he can pretend to more than 120 different jobs within the group…

Melchior joined forces with Nestlé to have the students work on a real live case for launching a sales operation in store. 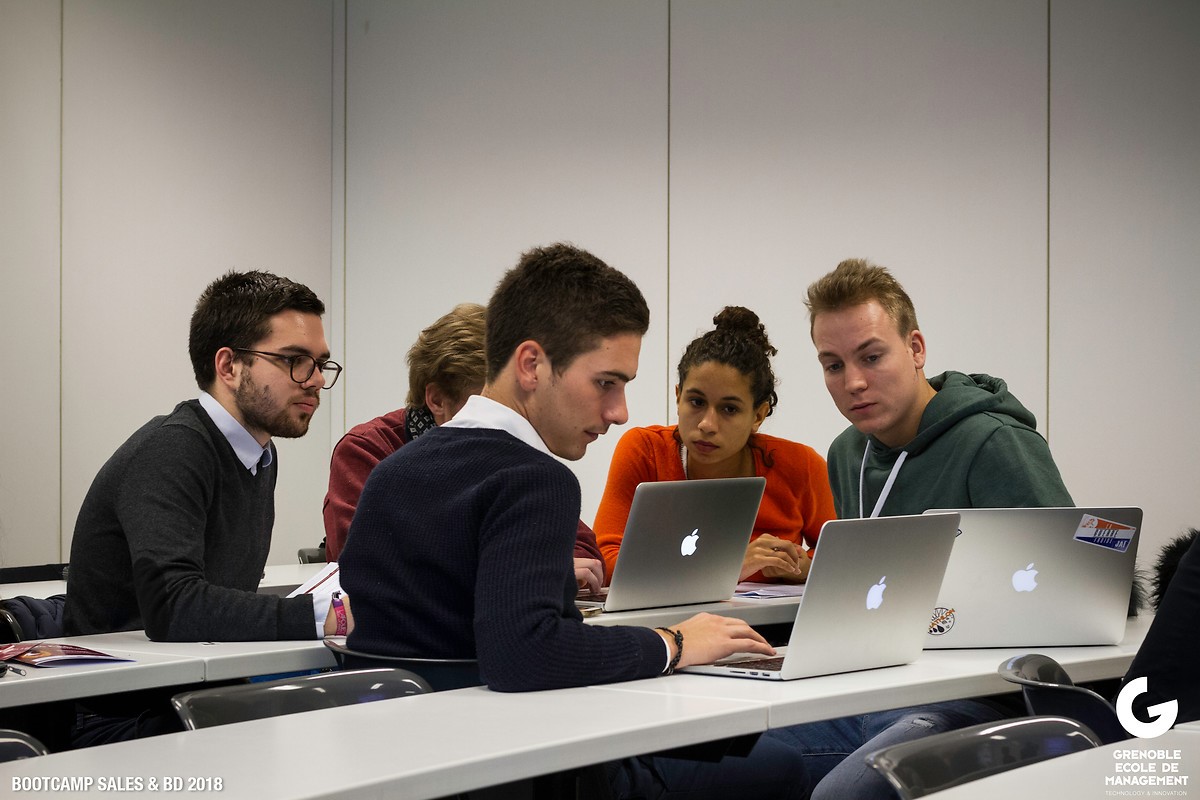 Today Key Account Manager at Nestlé, Guillaume Lambert graduated from GEM in 2009. Thanks to his work-study contract at Sodexo, he joined the company after his graduation. Following which, he was hired in 2011 by Nestlé and has already had five posts in seven years. This possibility of mobility and flexibility allowed by big companies like Nestlé attracts him.

Like a lot of students, Guillaume didn’t precisely know which job he would like to do whilst at school, but was interested by a position in sales. He profited from the global mentality of GEM where students didn’t fix themselves constraints for innovation and carried out challenging projects such as gaining sponsors for the Altigliss challenge in 2010-2011 (KPMG and Salomon).

Guillaume was delighted to return to GEM to participate in the Sales and Business Development Bootcamp, representing Nestlé and was extremely engaged in sharing his expertise and inciting students to envisage a career in this sector. 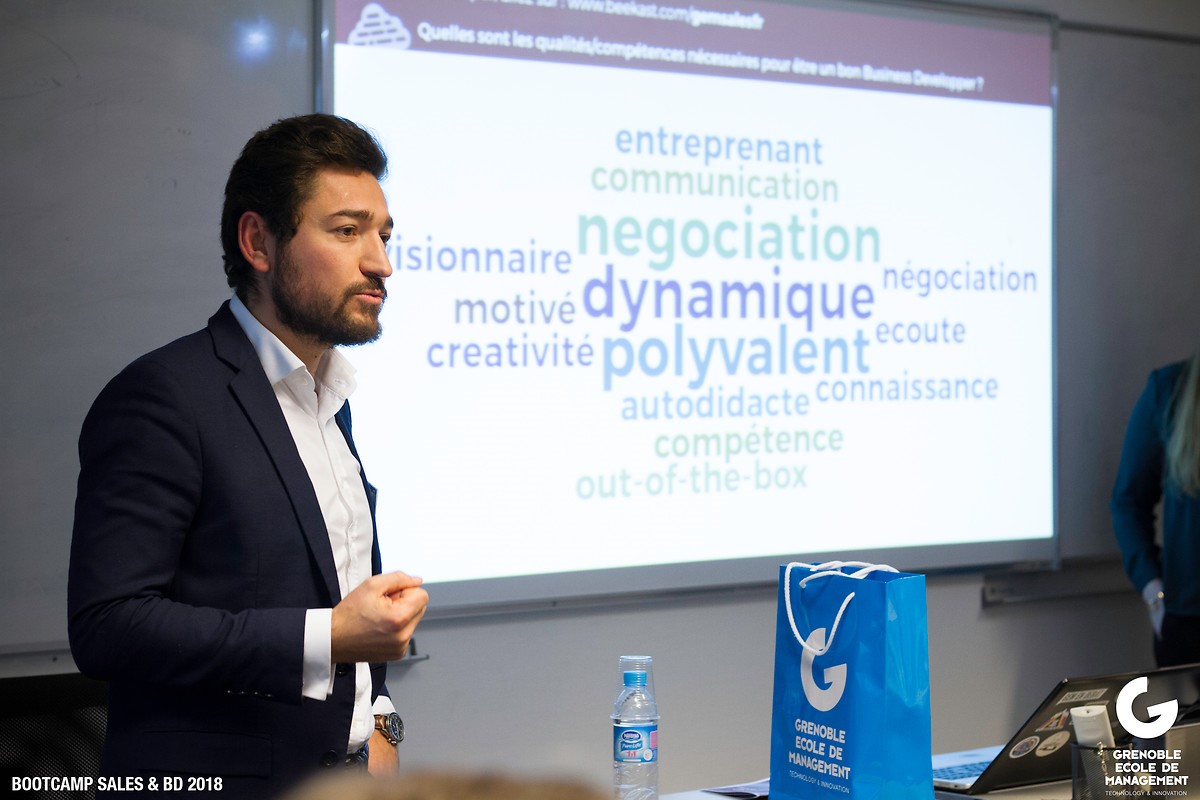 Chloé Guedel graduated from GEM in 2013 to join Procter & Gamble. Her progression has been fast as only 5 years after graduating Chloé has worked for P&G in Switzerland before moving to Paris for a new challenge where she is now in charge of the strategic marketing and sales for several brands of the group for the French, Belgian and Netherlands markets.

This type of career progression caracterises companies such as Procter & Gamble. During our exchange, Chloé shared the company culture, allowing us to understand the crucial impact of being given responsibility and autonomy: being empowered in such a way allows employees to want to stay and move up the managerial ladder she confided. Chloé highlighted key values such as sharing expertise, helping one another and evolving in a positive environment.

As an alumnus from GEM , one of her roles is to federate the recruitment opportunities within P&G and to help build motivation from future graduates at GEM to join the ranks of this multinational company. 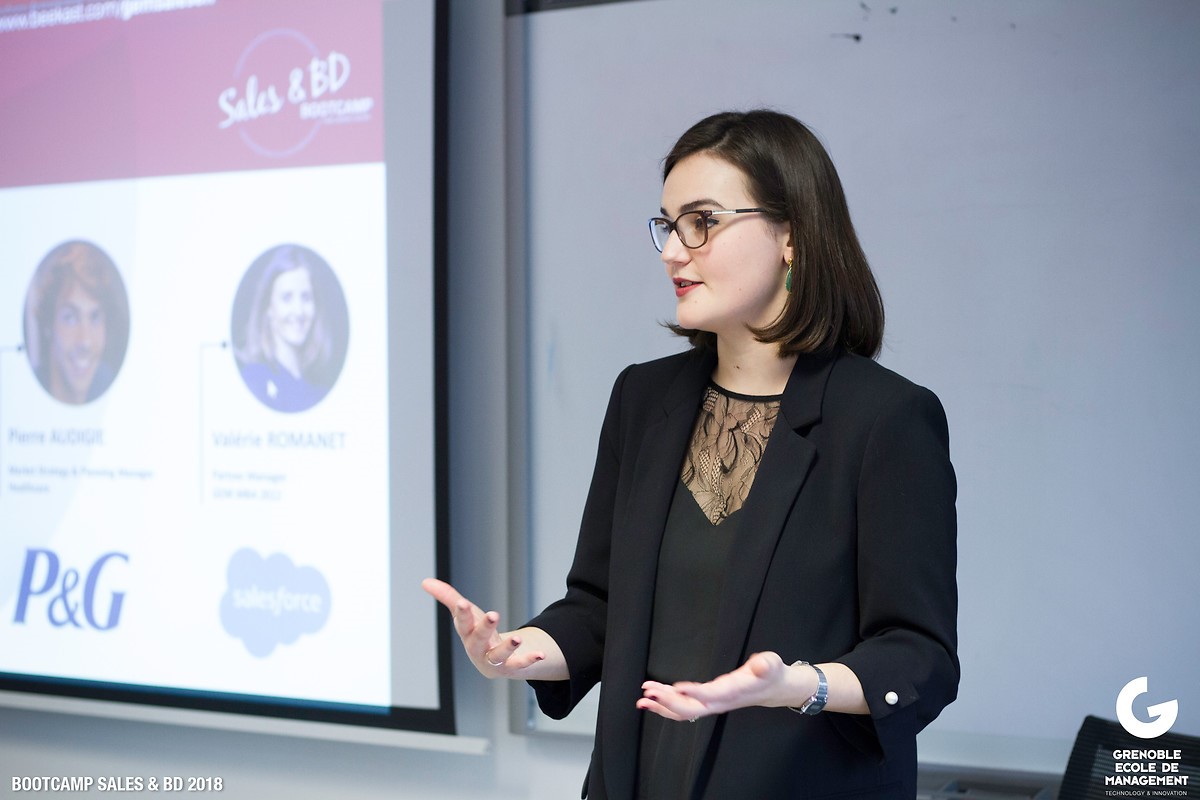